20 Jul
2019
The following images show the highlights of lunar related material from within the Society’s Collections, from late 16th century ‘lunar clock’ volvelles in Peter Apian’s Cosmographia to images of the Society’s Special Gold Medal awarded to Commander Neil Armstrong for his leadership of the Apollo 11 mission and its successful Moon landing on 20 July 1969

In 1524, Apian published his first work of major importance, Cosmographia, which was largely based on the work of Claudius Ptolemy, and provided an introduction to subjects such as astronomy, geography, cartography, surveying, navigation, and mathematical instruments. Apian described the Earth in relation to the heavens according to the 1,400-year-old Ptolemaic system which maintained that the Sun revolved around the Earth, as illustrated in the famous image depicting Earth as seen by the divine eye in relation to the sphere of the fixed stars. This view was challenged less than 20 years later by Nicolaus Copernicus’s theory that the Earth revolved around the Sun.

This volvelle can be used as a lunar clock, alongside a sundial, to determine time at night. The inner disc is set to show the current phase of the Moon through the window. After determining the hour angle of the Moon, using a sundial as a moondial, and setting the lunar dial of the volvelle to that hour angle, the location of the Sun can be found and the time at night worked out.

Apian’s Cosmographia was later published in several expanded editions by the Dutch physician, mathematician and instrument maker, Gemma Frisius (1508-1555). Apian’s original work had modest success but the enlarged edition by Frisius became a bestseller throughout Europe.

Some of the most spectacular celestial maps and illustrations of all time appear in the cosmographical atlas, Harmonia macrocosmica by Andreas Cellarius (c.1595-1665). The true purpose of this great atlas was scientific and Cellarius’s charts depict the cosmographical systems of Ptolemy, Copernicus and Tyco Brahe, and the motion of the Sun, Moon and planets. 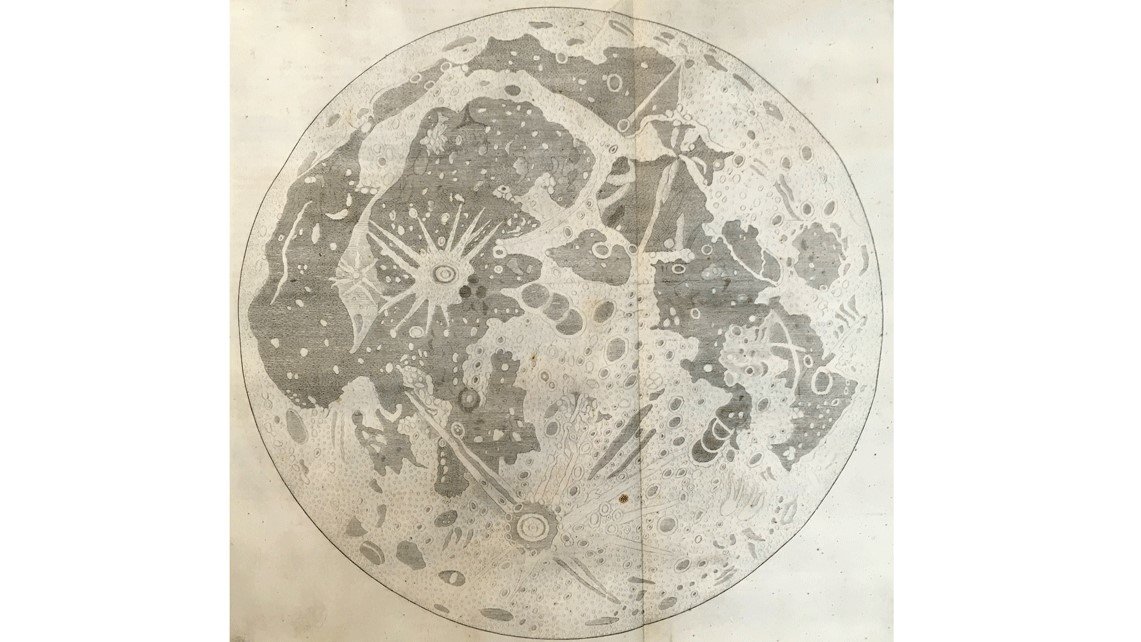 Athanaias Kircher (c.1602-1680), a German Jesuit priest and scholar, was known as a man who studied everything, collected everything and is often referred to as ‘the last man who knew everything’. Kircher was an inventor, composer, geographer, historian, geologist, astronomer, philosopher, Egyptologist, physicist, mathematician, naturalist, archaeologist and proprietor of one of the first museums open to the public (The Museo Kircheriano in Rome). His geographical and geological investigations resulted in the publication of Mundus Subterraneus (1664), most notable for containing plates of the Earth’s interior as well as illustrations of the eruptions of Mt. Vesuvius and Mt. Etna, the Sun and the Moon.

Alain Manesson Mallet (1630-1706) first published his five volume encyclopaedic description of the world, Description de L’Univers, in 1683. Although the maps it contained were based on earlier prototypes Mallet drew many of the plates himself. His plates often combined a scientific illustraion with a rural scene, providing aesthetic appeal to his readers.

Wilhelm Beer (1797-1850), a German banker and amateur astronomer, with Johann Heinrich von Mädler (1794-1874), a German astronomer, constructed the most complete map of the Moon of the time, Mappa Selenographica (1836). From Beer’s private observatory and with the use of his Fraunhofer refractor, a large refracting telescope which used achromatic lenses as opposed to the mirrors of reflecting telescopes, Mädler and Beer measured the position of every lunar detail in precise micrometric measurements.

The map took four years to complete and was one of the most influential lunar publications of its time, forming the basis for many later published lunar maps. It was the earliest and finest of lithographed lunar maps and the first map of the Moon to be divided into quadrants.

The historic launch of the Apollo 11 mission in 1969, sent Armstrong as Commander, along with Col. Edwin Eugene ‘Buzz’ Aldrin and Lt. Col. Michael Collins, on the first manned mission to land on the moon. Although both Aldrin and Armstrong set foot on the moon, Armstrong gained the distinction of being the first man to land a space craft on the moon and the first to step foot on its surface.

Photographs of the Special Gold Medal awarded by the Society to Commander Neil Armstrong for being ’the leader of the Apollo 11 Expedition, and the first man to stand on the surface of the moon … for space exploration’. (rgs026014, rgs701022)

The presentation ceremony for this Special Gold Medal took place on 16 November 1970, at the Hyde Park Hotel London, and was hosted by Society President Rear-Admiral Sir Edmund Irving. Commander Neil Armstrong received one of the Society’s rare Special Gold Medals, struck for that specific event, illustrating the cratered moon surface on the obverse and engraved ‘PRESENTED BY THE ROYAL GEOGRAPHICAL SOCIETY / TO / NEIL ARMSTRONG / EDWIN ALDRIN / MICHAEL COLLINS / 20 JULY 1969 / FIRST LANDING ON THE MOON’ on the reverse. He also took receipt of silver replicas for his two colleagues on their behalf. The medals were presented to Commander Armstrong by the Duchess of Kent (being the wife of the Society’s Honorary President, who was serving with the United Nations Forces in Cyprus at the time).

‘Two generations ago, curious men around the world gathered on a few campuses and academies to investigate the world, the miniature world of the adult. Now, curious men from around the world join to learn the mysteries of the gigantic world of the Cosmos around us. They make these investigations to seek knowledge, but as you know, knowledge is not wisdom; that takes knowledge plus experience plus understanding. I thought of these characteristics as I floated silently in orbit about the moon, and looked at landmarks named after the great geographers of history - Kepler, one of the early charters of the skies, and Langrenus, that cartographer of the Court of Spain, and Eratosthenes, who first computed that our earth was a sphere of circumference 25,000 miles. So I accept these medals for myself and my colleagues and for those men in history who have inspired each of us in this room to seek new frontiers, and to understand them. I raise my glass with thanks to understanding.’

A lead proof strike of the obverse of the Special Gold Medal presented to Commander Neil Armstrong is housed in the Society’s Collections (Artefact F16 - rgs701022).

This lunar globe from the 1970s shows details of the Moon’s surface along with the position of all Moon landings at that time, including the Apollo 11 landing site at the Mare Tranquillitatis (Sea of Tranquility), 20 July 1969.

Get the best of Geographical delivered straight to your inbox by signing up to our weekly newsletter and get a free collection of eBooks!

Like longer reads? Try our in-depth dossiers that provide a comprehensive view of each topic

Want to stay up to date with breaking Geographical stories? Join the thousands following us on Twitter, Facebook and Instagram and stay informed about the world.